PINK & ORANGE, the new creation by Kunst/Werk & ChampdAction, would have premiered in STUK late January. That happened without an audience, but luckily with a camera crew present. The result is an online premiere, on March 13 via Podium 19.

➤ PINK & ORANGE on Podium 19
➤ Live on Saturday 13.03.2021 at 23:30 or via VRT NU.
➤ Podium 19 is a new and free culture channel, offering virtual performances, shows and concerts from Flemish cultural centres and arts centres. You can watch Podium 19 on channel 19 of Proximus Pickx (channel 269 in Brussels or Wallonia), channel 99 on Telenet TV, channel 20 of Orange TV, or online via VRT NU.

Vanrunxt is fascinated by the intense collaborations of the Judson Dance Theater and the triumvirate of John Cage, Merce Cunningham and Robert Rauschenberg in the New York of the 50s, 60s and 70s. Their innovative approach of music, form and movement and the interaction between those artforms inspired generations of artists.

In the same spirit, PINK & ORANGE sees Vanrunxtput together a collaboration with ChampdAction centered around John Cage's work. After a proposal by pianist Yutaka Oya, two compositions for solo performer by John Cage are played simultaneously by organist Iris Eysermans and Yutaka Oya on piano : Organ2/ASLSP (1987) for portable organ and Sonatas and Interludes (1946-48) for small (prepared) piano. ASLSP stands for As Slow As Possible and turns Organ2/ASLSP into one long volume. The construction of Sonatas and Interludes, on the other hand, is capricious and fragmented, in stark contrast with the introspective ASLSP. That way, PINK & ORANGE embodies two ways to deal with time, duration and dynamics. John Cage himself encouraged this type of confrontation and dialogues with his music.

PINK & ORANGE - the title comes from an eponymous small abstract 1951 painting by Elsworth Kelly - looks for new relations and communication between unexpected elements. What is between pink and orange? How much is Cage times Cage?

PINK & ORANGE was partly created during residencies in STUK. During the last residency before the planned premiere, we got a sneak peek and talked with choreographer Marc Vanrunxt. 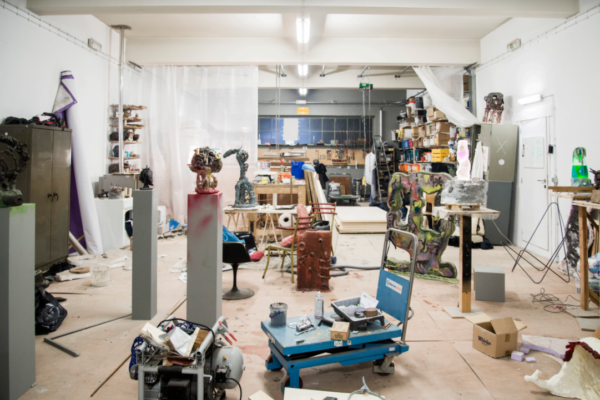 Residency building up to the premiere of the new creation Pink & Orange by Kunst/Werk and ChampdAction.